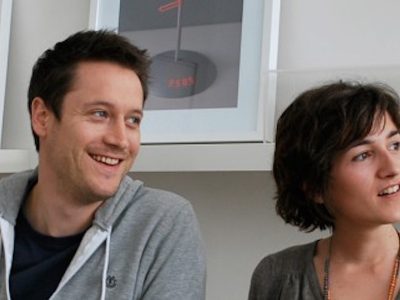 IDSL is a product and service design consultancy based in Paris, specialised in interaction design,
Human Computer Interaction (HCI), a consultancy on innovation and emerging technologies.

Nicolas Gaudron (left on the photo) founded IDSL in 2007. He has worked for IDEO in Palo Alto
(California), for INRIA (French National Institute for Research in Computer Science and Control)
where he has worked on the “Interliving” European research project of the Disappearing
Computer IST programme. He has then joined Renault ”Prospective & Concept Cars” design
studio where he has contributed to the development of the Human-Machine Interaction group.
He holds a Master of Arts from the Royal College of Art in London.

Virginia Cruz (right) joined IDSL as an interaction designer in 2008. After working for Electrolux
in Sweden, Sony R&D in Paris, Virginia worked for Orange/France Telecom as an interaction
designer for four years, ﬁrst at the Smart Objects and New Interfaces Lab in Grenoble (FR), then
at the ExploCentre Innovation Centre in Paris. She has also contributed to the Eternal Gandhi
Multimedia Museum project in New Delhi. She holds Engineering degrees from Ecole
Polytechnique (FR) and Ecole des Mines des Paris (FR) and a Master of Arts from the Royal
College of Art in London (UK).